I am very pleased to welcome to New York and to GEI Gianni Zonin, who, as you know, is Chairman of Casa Vinicola Zonin and Chairman of Banca Popolare di Vicenza. Chairman Zonin is in New York today to inaugurate the New York representative office of the Bank.

Gianni Zonin was born in Gambellara in the Province of Vicenza. At the completion of his studies, he received a diploma in enology from the Enological Institute of Conegliano Veneto and, afterward, a degree in law.

From his early youth, he was involved in the cultivation of grapes and production of wines, an activity in which his family has been engaged for generations. When in 1967 the family operation was transformed into Cantine Zonin S.p.A., a joint-stock company with headquarters at Gambellara, he became its chairman at the age of 29.

The Zonin Wine House, a company of family-owned vintners since 1821 proud of its heritage and reputation for creating authentic Italian wines, has steadily developed. Throughout the years, the company has substantially expanded the number and size of its directly owned vineyards in Italy and the United States through the acquisition of twelve major wine estates, including the beautiful Barboursville Vineyards estate in Virginia.

The properties, with 1.800 hectares planted in specialized vineyards, are located in regions that are highly regarded for their production of world-class premium wines. The Zonin family heads the most important viticultural group in Italy and one of the leading private winemaking companies in Europe.

The Zonin Group now employs approximately 550 persons and reported sales of 107 million euro in 2010. Foreign markets accounted for more than 60% of total sales.

In addition to wine, which has been Gianni Zonin’s first love, he has had a parallel, very successful career in the banking sector. He has been the Chairman of the Banca Popolare di Vicenza since 1996. Under his guidance, the Bank has had a strong increase in terms of size and organizational structure, and from a local and historic bank established in 1866 based in the Province of Vicenza, became a National Banking Group.

In line with its vocation to support the local economies, the bank has constantly increased its support to exporters, thanks also to its foreign representative offices located in Hong Kong, Shanghai, New Delhi, Sao Paulo and the most recent one right here in New York.

In 1989 Gianni Zonin was conferred by the President of the Italian Republic of the title of Cavaliere del Lavoro, the highest civilian meritorious award bestowed by the Italian government. Not to mention that he has also received many other awards for his activities in the wine and banking sectors.

I have known Gianni Zonin and his family for many, many years, and I have always admired Gianni’s great qualities, particularly his ambitious vision to create successful, powerful empires in the two very different industries of wine and banking.

I am therefore very pleased to welcome and honor Cavaliere del Lavoro Gianni Zonin and to present him on behalf of GEI with the “GEI FRIENDSHIP AWARD” in recognition of his many accomplishments in Italy and abroad. 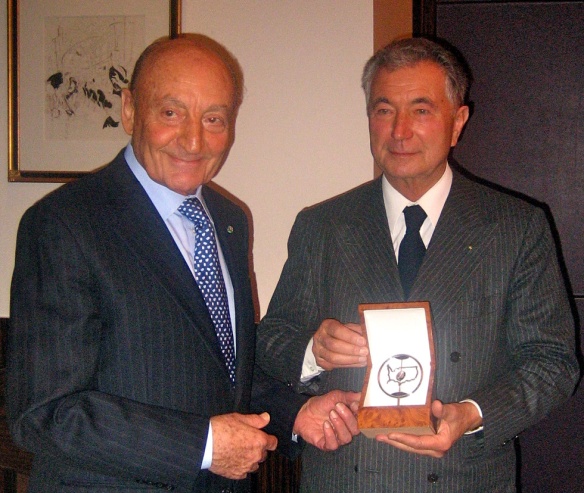 The breakfast was held on February 24, 2012 in the Stella Private Room of Le Cirque restaurant in New York City.