He had been Co-President and Partner at Clayton, Dubilier & Rice, Inc., which he joined in 1985 as one of three equal principal shareholders.

Before then, he served as Senior Vice President at Warner Communications, where he was responsible for mergers, acquisitions and divestitures.

Prior to working at Warner Commuications, he was Vice President at IFI International, the international holding company controlled by the Agnelli family.

In 2008, Alberto Cribiore joined Institutional Clients Group, which includes the investment and corporate bank as well as all capital market and alternative investment activities.

In this distinguished position, Mr. Cribiore has and continues to exemplify great leadership in leveraging Citi’s global network, creating access and building relationships at the highest levels of management among existing and potential clients.

He has served on the Board of Directors of Merrill Lynch where he was the non executive Chairman, and currently serves as a Director of GAB Robins and various other Bera controlled companies.

Mr. Cribiore is also an advisory Director of the Metropolitan Opera Association and Founder and Honorary Chairman of the New York City Chapter of the Bocconi University Alumni Association.

In addition, he is the director of the Council for the United States and Italy and a member of the Weill Cornell Medical College Board of Overseers.

Mr. Cribiore is highly respected for his outstanding qualities and exceptional leadership, as well as for his tireless efforts in making Citigroup one of the most prominent global banks in the world

Therefore, I am pleased to welcome Alberto Cribiore and present him on behalf of GEI with the “GEI FRIENDSHIP AWARD” for his many achievements. 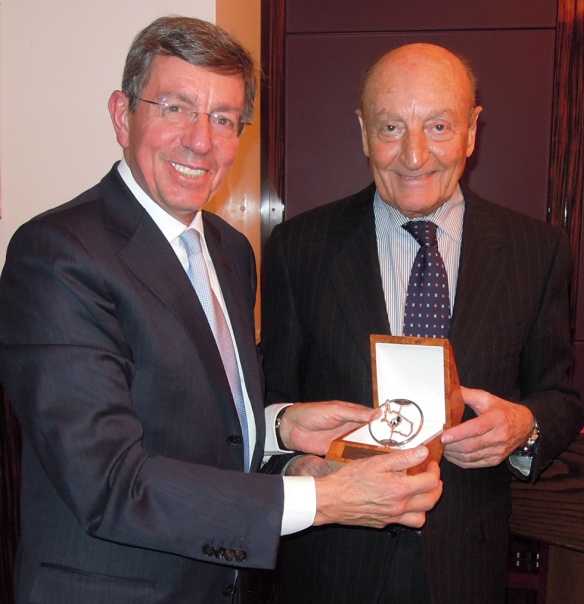 The luncheon was held on January 29, 2013 in the Stella Private Room of Le Cirque restaurant in New York City.