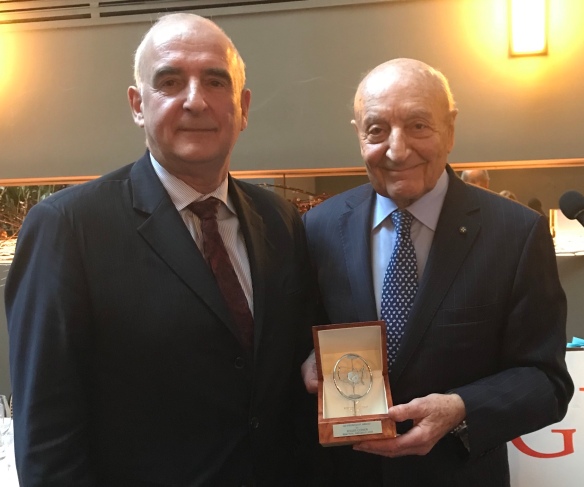 It is with great pleasure that – on behalf of GEI and myself – I extend the most cordial welcome to Roger Cohen, Opinion Editor Columnist for The New York Times.

Born in London, Mr. Cohen, a naturalized American, received an M.A. degree in History and French from Oxford University in 1977. He speaks French, Italian, Spanish, Portuguese and German and has served as Ferris Professor of Journalism at Princeton University.

Previously, Mr. Cohen was a foreign correspondent for The Wall Street Journal and Reuters, reporting from the Middle East, South America and Europe.

From 1977 to 1979, Mr. Cohen worked as a freelance journalist based in Paris. He is co-founder of Speakeasy, a newspaper for students learning English, launched in 1978 by Fernand Nathan, the French publisher.

Mr. Cohen is the author of four books: Soldiers and Slaves, American POWs Trapped by the Nazis’ Final Gamble  –  Hearts Grown Brutal, Sagas of Sarajevo, An account of the wars of Yugoslavia’s destruction  –  In the Eye of the Storm  A biography of General Norman Schwarzkopf,  –  His family memoir,  The Girl From Human Street: A Jewish Family Odyssey.

Mr. Cohen is the recipient of several prizes, including: the Peter Weitz Prize from the German Marshall Fund for dispatches from Europe, an Overseas Press Club citation for a series on immigration, and the Arthur F. Burns Prize for commentary on German-American relations.

He also received several Overseas Press Club Citations for his outstanding coverage of world events as well as the Lifetime Achievement Award from the New Century Foundation’s International Media Council in Britain, and the SOPA Excellence in Opinion Writing Award for “Australia’s Offshore Cruelty” and for “Myanmar is not a Simple Morality Tale”.

Please join me in congratulating Roger Cohen and join me in presenting him with the “GEI Friendship Award” in recognition of his many outstanding achievements.

The luncheon was held on February 5, 2019 in the Atrium Room